The Man who could have built the Forth Bridge

John Dixon (1835-1891) was one of the generation of British contractors who built railways, bridges and other civil engineering works around the world. Today most are generally forgotten, a fate entirely undeserved by the man who erected Cleopatra’s Needle on the Thames Embankment and who built the first railway in China. John Dixon was competent and self-confident, with the boundless enthusiasm and energy typical of Victorian contractors.

Had his tender for the construction of the Forth Railway Bridge been accepted, and it was the lowest tender received, history would have treated him differently. This book describes the life and works of John, his bridges, railways, jetties, seaside piers and other projects. His wider business interests, his professional colleagues and his family life are also covered.

It includes an explanation of why his tender for the Forth Bridge was unsuccessful, but only mentions Cleopatra’s Needle briefly as this is worthy of another book. Indeed, John’s brothers, Sir Raylton Dixon (1838-1901) and Waynman Dixon (1845-1930) were also distinguished engineers and it is hoped to publish similar books on their careers. John, Raylton and Waynman Dixon were members of the same Dixon family, from Raby, Cockfield and Newcastle upon Tyne, as was Jeremiah Dixon of Mason-Dixon Line fame.

We are absolutely delighted to have made the latest edition of #bookshoptoursofbritain by Louise Boland £16.99 in paperback. Bookshop Tours of Britain is a slow-travel guide to Britain, navigating bookshop http://www.chapteroneloftus.co.uk #chapteroneloftus #indieloftus #loveloftus 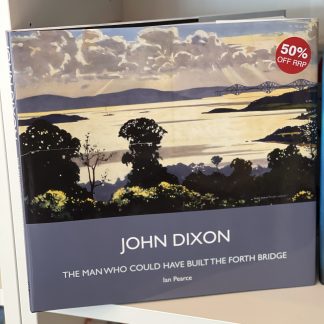 You're viewing: The Man who could have built the Forth Bridge £12.50
Add to basket