A landmark comedic novel about a group of queer teens at their worst – and ultimately their best – from one of the UK’s leading writers of LGBTQ+ teen fiction. Barney’s a shoo-in for his school’s LGBTQ+ Society President at the club’s next election. But when the vote is opened up to the entire student body, the whole school starts paying attention.

How low will the candidates go to win? Buckle up for some serious shade, scandals and sleazy shenanigans. It isn’t long before it’s National Coming Out Day – for everyone’s secrets! But when the group faces an unexpected threat – and a big opportunity – can the club members put politics aside and stand united? Simon James Green is the award-winning author of a number of beloved LGBTQ+ YA novels, including Noah Can’t Even, Heartbreak Boys and You’re the One That I Want. Perfect for fans of Glee, Heartstopper, and Boyfriend Material.

Praise for Gay Club! “Gay Club! wears its activism with pride, and is packed with drama, plot twists and politics.” – Dean Atta (The Black Flamingo) “Gay Club! holds up a mirror to the experiences of being LGBTQ+; to the messiness, the humour, the hardships, and most of all, to the love and celebration.” – Adiba Jaigirdar (Hani and Ishu’s Guide to Fake Dating) “Funny, heartfelt, and angry in all the right ways, Gay Club! is a love letter to the messiness of our big gay family, and a manifesto for creating the change that the youngest members of that family need so badly today. A triumphant call to action.’ – LC Rosen (Camp and Jack of Hearts (and other parts)) “One of the most hilarious, romantic writers in the game right now.” – Becky Albertalli (Love, Simon) “Quite possibly his best work yet. It left me crying with laughter late into the night because I literally could not put it down.

Brilliantly controversial, so very witty, and full of enough queer joy to make any heart burst. Truly outstanding from start to finish – now I want to join the gay club too.” – Calum McSwiggan (Eat, Gay, Love) “Simon James Green has an impeccable ear for authentically funny dialogue. This book will make you laugh the way your best friend makes you laugh.’ – Ciara Smyth (The Falling in Love Montage and Not My Problem) ‘Once again, Simon James Green has knocked it out of the park.

Gay Club! is Simon at his very very best. Hilarious and heart-warming with a gorgeous cast of characters and a beautiful message at its heart. I defy you to find a queerer book in 2022.

Sign me up to Gay Club immediately. Shut up and take my money!’ – George Lester (Boy Queen) ‘Gay Club! is so smart and so funny, and full of characters who are also smart and funny. It’s everything I want from a book and from life.

Everyone will love it! May I suggest you all join Gay Club with utmost urgency.’ – Wibke Brueggemann (Love is for Losers) “Gay Club! cements Simon James Green’s position as the master of LGBTQ Young adult fiction. No one today writes with such heart and lightness of touch – an author whose skill both intimidates and inspires his peers.” – William Hussey (The Outrage)

Be the first to review “Gay Club!” Cancel reply 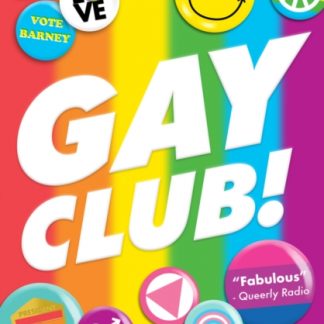