The fire. The thief. The scroll box.

People are asking questions about the library. Questions that might relate to her sister’s murder. And something called The Absolute Book.

A book in which secrets are written – and which everyone believes only she can find. They insist Taryn be the hunter. But she knows the truth.

The Absolute Book is a tale of sisters, ancient blood, a forgotten library, murder, revenge and a book that might just have the answer to everything. _______ PRAISE FOR THE ABSOLUTE BOOK: ‘Contains multitudes, spanning the geographies of Canada, Britain and New Zealand; the cosmologies of fairies, demons and angels; and the genres of thriller, domestic realism and epic fantasy . .

. I’m in awe of it’ NEW YORK TIMES Review of Books ‘Intricately plotted and gorgeously written, THE ABSOLUTE BOOK has something for everyone . .

. Here is a cinematic tale that is by turns dark and dreamlike, yet ultimately hopeful’ DEBORAH HARKNESS, author of A DISCOVERY OF WITCHES ‘Gorgeous. The payoffs and reveals are mind-blowing’ LAINI TAYLOR, author of DAUGHTER OF SMOKE AND BONE ‘An angelic book, an apocalyptic book, an astounding book’ FRANCIS SPUFFORD 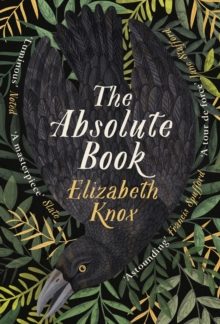 You're viewing: PRE-ORDER The Absolute Book £14.99
Add to basket